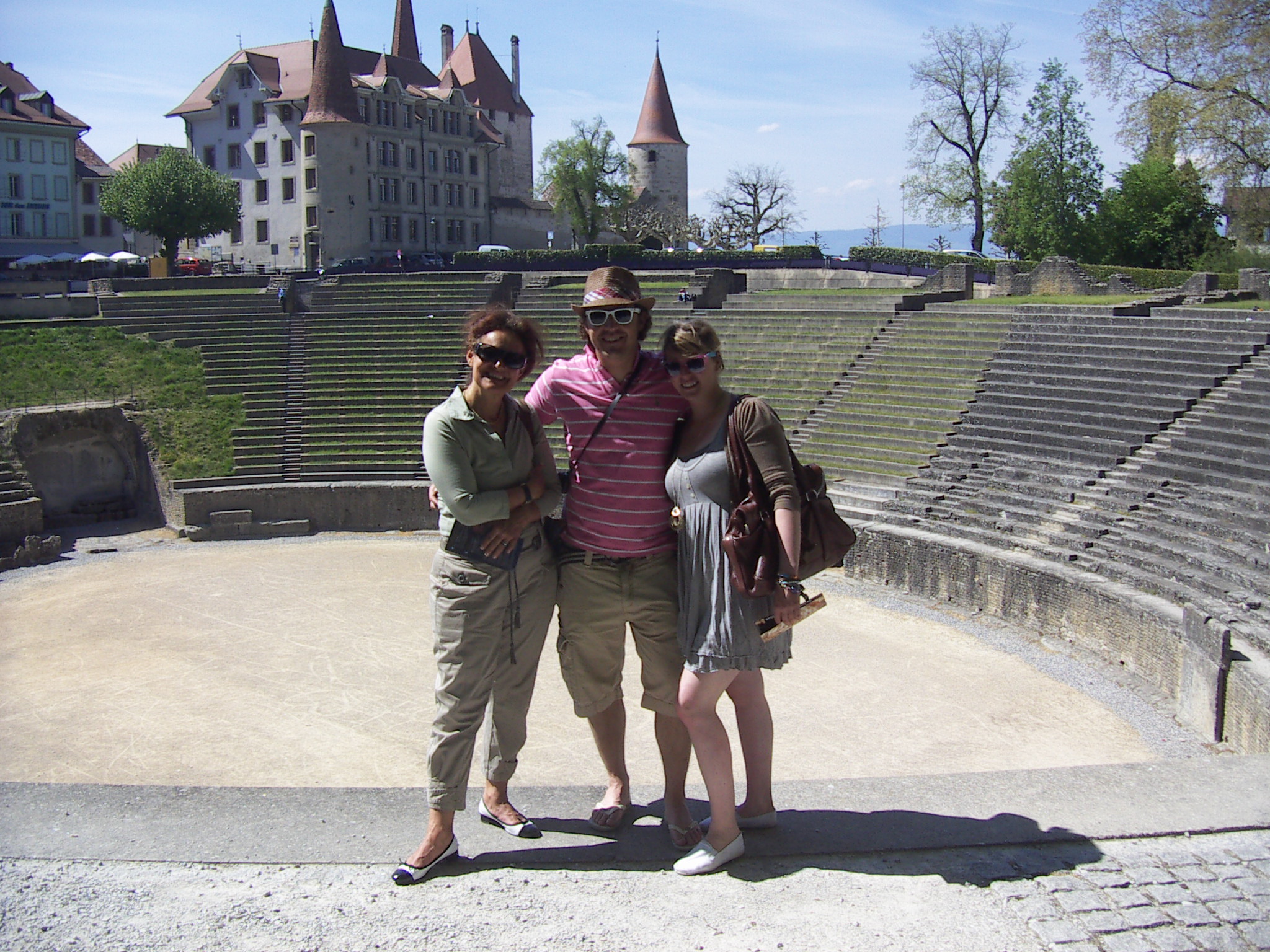 Aventicum - capital of the Roman province of Helvetia - once a large walled city boasting this arena, temples and a theatre, spread over more than three square miles, much larger than the charming small town of Avenches, today and best known for its largest employer, Nespresso. Every summer open air concerts and operas are performed in the arena.

The earliest inhabitants of Switzerland lived alongside the lakes of Neuchatel, Murten and Biel in the north-west quadrant of the modern country. These people built their houses on stilts to protect themselves from the lakes flooding each spring when the snow melted on the Jura mountains and the more distant Alps. There is a splendid small museum near Finels on the Lake of Biel, packed with wonderfully preserved tools, weapons and home artefacts discovered on the lake bed by archaeologists diving and exploring the thick mud.

Hundreds of years after the lakeside dwellers the local tribe, called the Helvetii, decided to migrate, their ambition to settle the fertile lands in Western Gaul. This plan threatened to alter the political balance of power in Gaul and brought them into direct conflict with the Romans, more specifically with Julius Ceasar, at that time campaigning to pacify Gaul. The Helvetii and Caesar's army clashed at a large Celtic hill city, Bibracte, nowadays a superb archaeological site in the middle of Burgundy. There in a pitched battle against six legions - and that was a huge force in those days for the Roman Army to put into the field given that twenty-five legions ruled the empire - the Helvetii suffered a massive defeat. The whole tribe with women and children and herds retreated back to the Swiss plateau. Bibracte cost the Helvetii their political independence.

When the Romans colonised Switzerland they settled along the fertile stretch of country running from the Lake of Geneva north-eastwards to the River Rhine. The Helvetii long had established small towns and trading communities which the Romans improved and fortified. The Romans also founded settlements beyond the lands of the Helvetii, such as Nyon beside the Lake of Geneva. 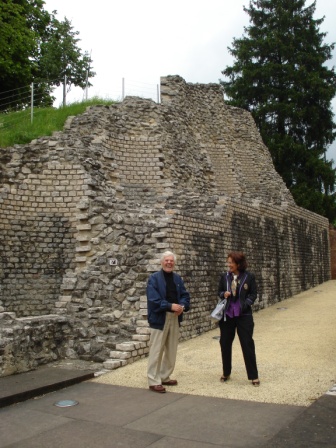 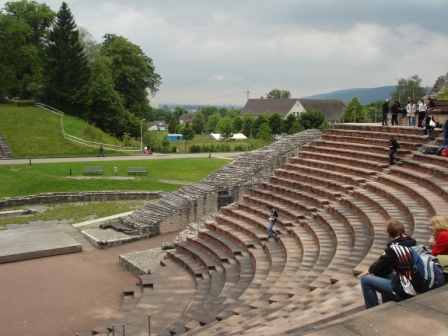 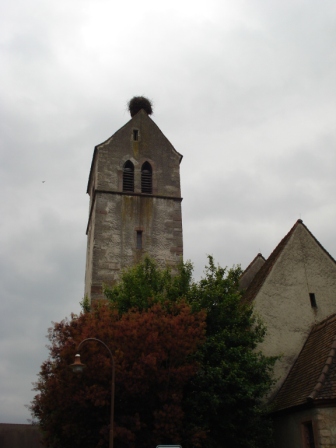 Their main port was on the Rhine - Augusta Raurica - today its considerable remains are a vast open air museum. A stork nests on the church tower beside the Rhine. 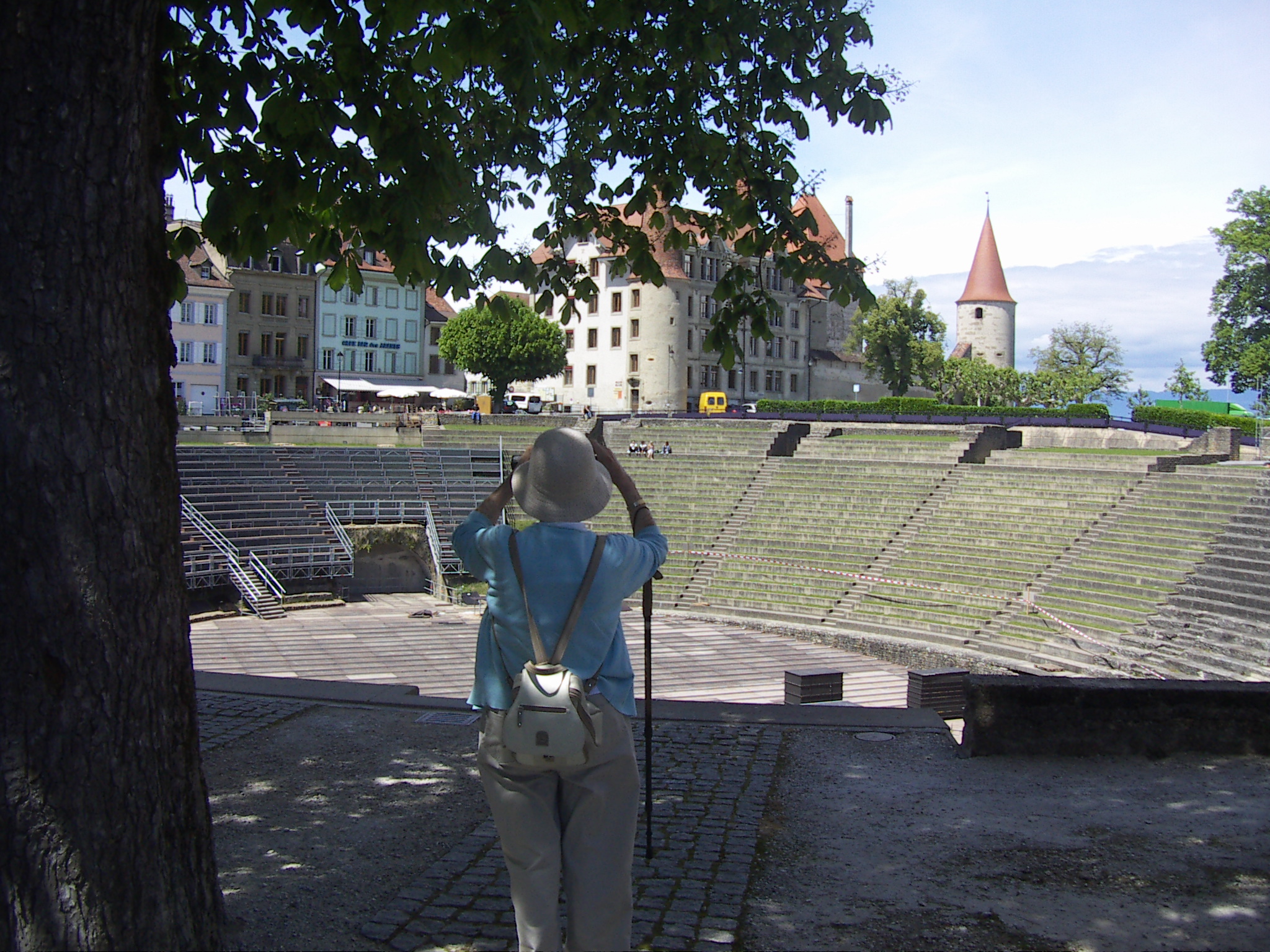 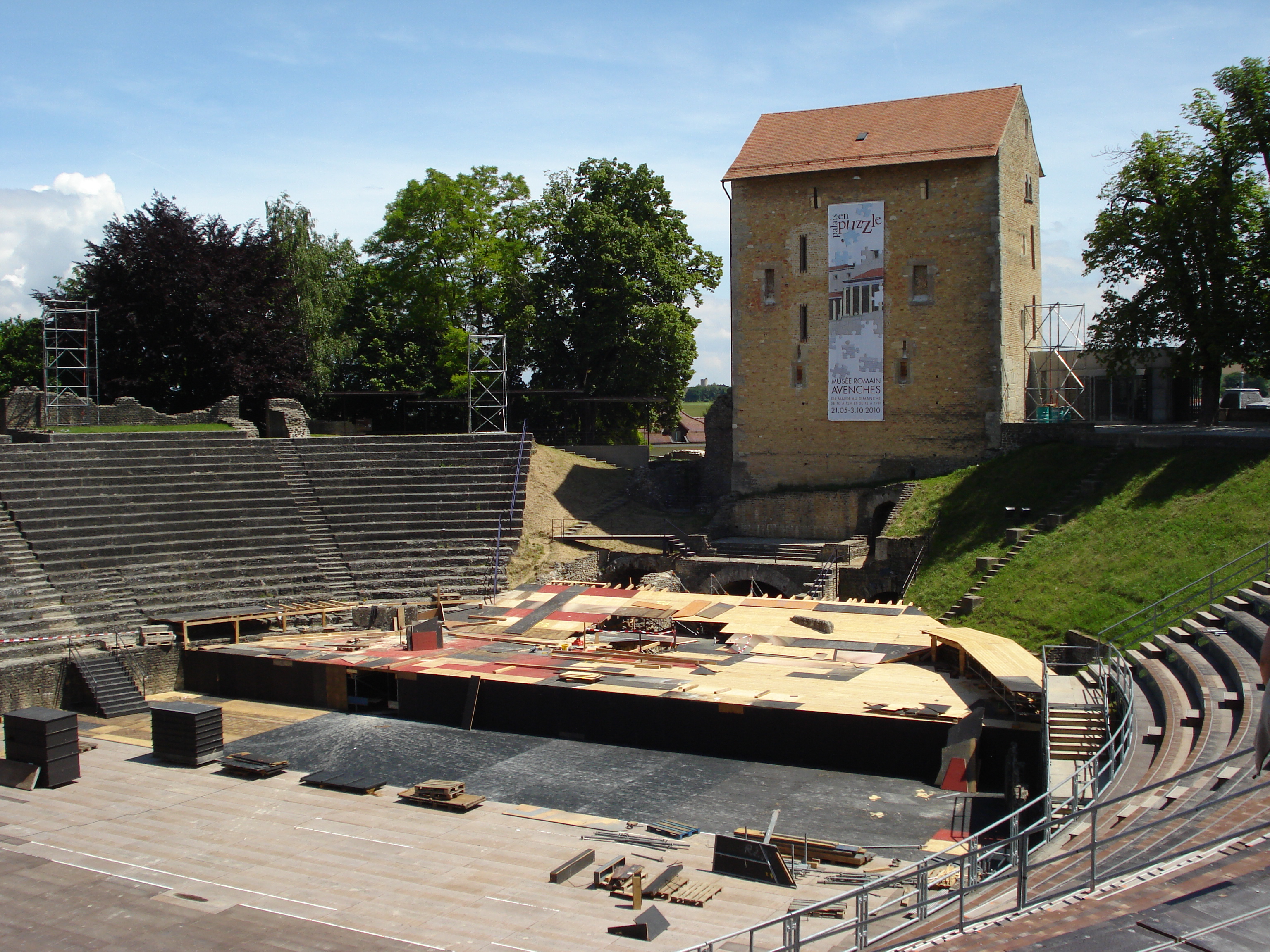 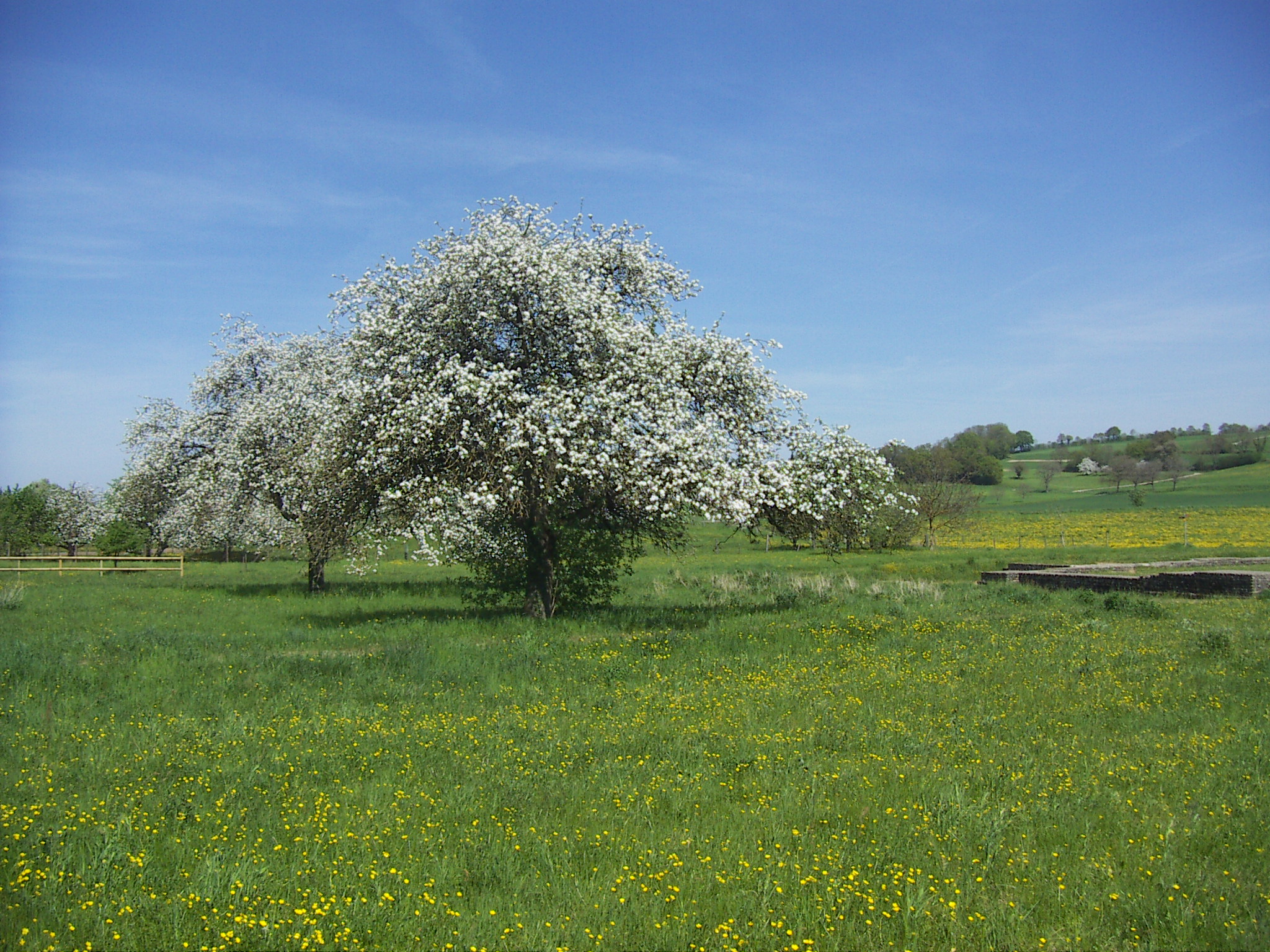 Almost ready for the opera season - cherries blossom where once was a busy the Roman city. The wall still runs along the distant hill.

Aventicum was the capital of the province for over four hundred years. At its peak the town boasted a population of about 20,000 people. During the third century AD the German tribes made the Roman position in Switzerland more and more precarious but it's difficult to know the actual impact on the town. Rome's occupation of Switzerland ended in 456 AD. We do know that Avenches had a Christian Bishop until the end of the sixth century when the See was transferred to Lausanne. Avenches today has about 700 inhabitants. Excavations of the Roman city continue and there is an excellent museum in the gate tower of the amphitheatre. 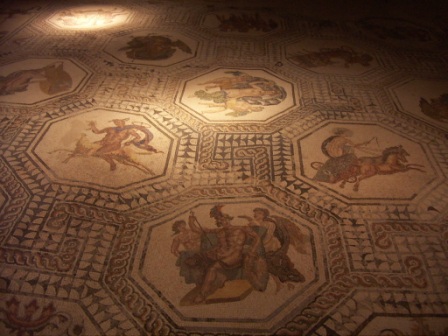 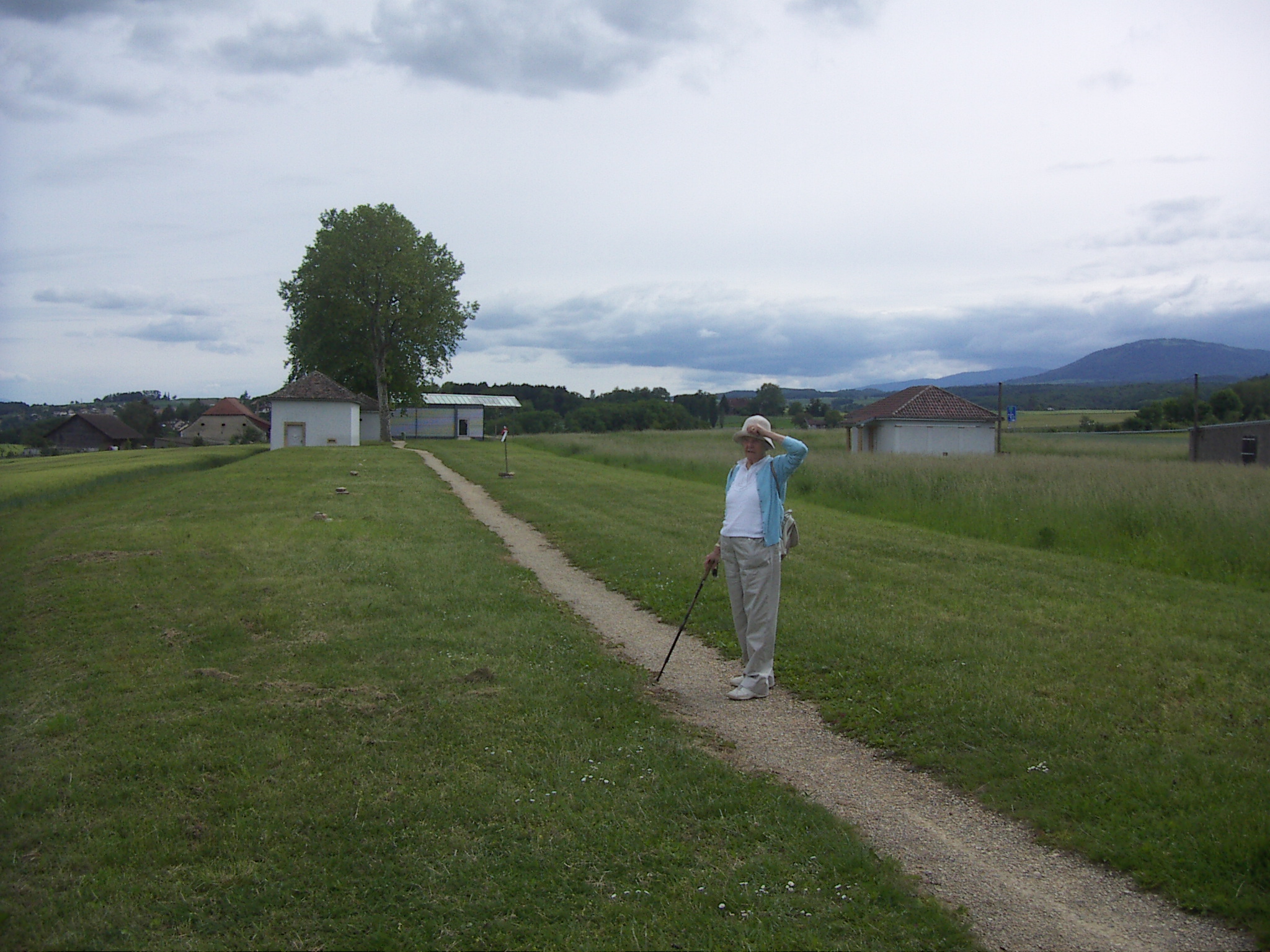 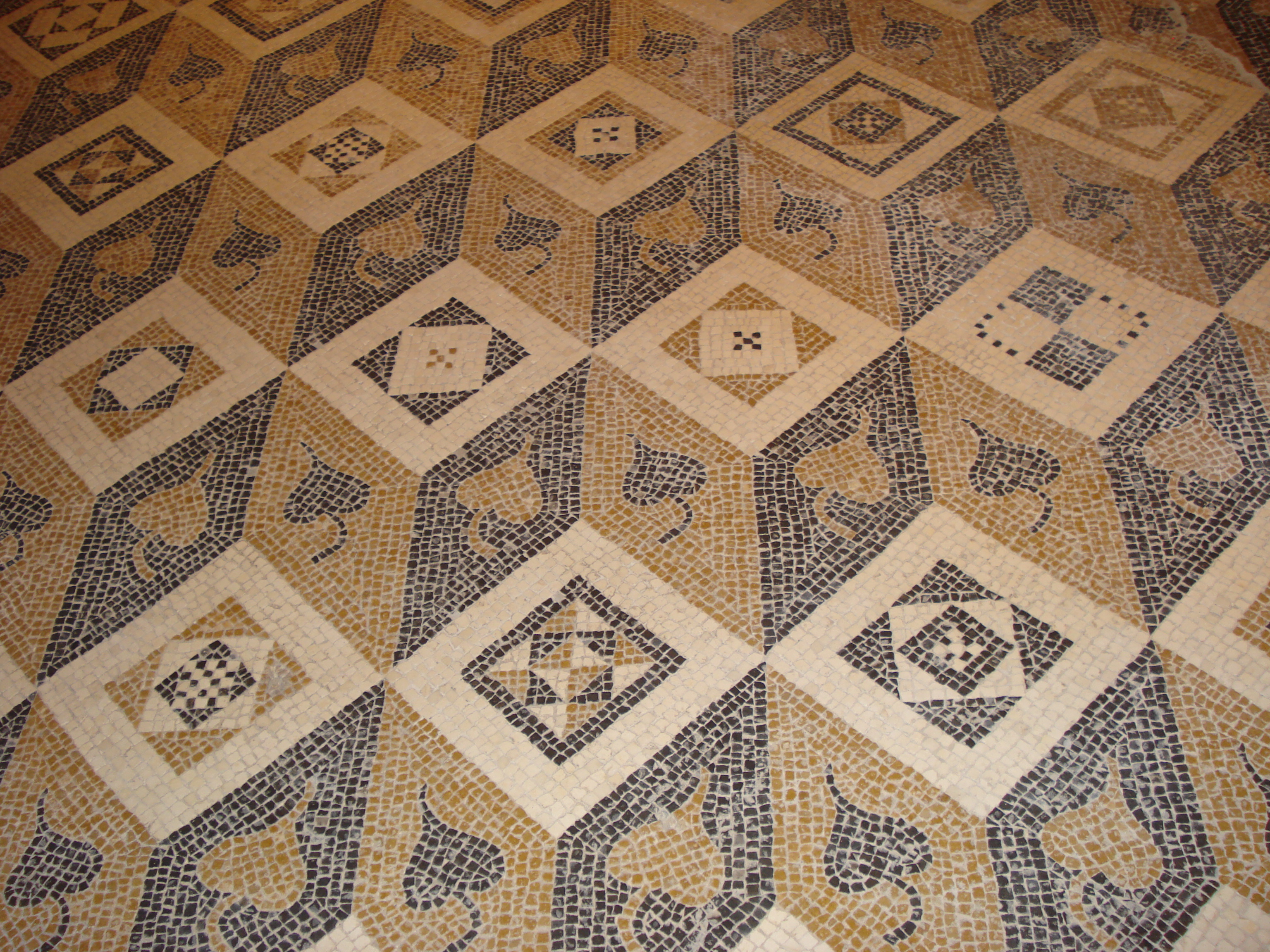 More recently a marvellous treasure was the largest Roman villa discovered in Switzerland. Very little of the site has been excavated but, so far, wonderful mosaics have been unearthed. Top left is a mosaic calendar with the days of the week and top right is a superb coup d'oeil. The whole site is about 500 metres square and the mosaics exposed so far are sheltered under four specially constructed, small houses - centre photo. One can only imagine what may be found over the coming years.

The great pleasure of viewing Roman sites in Switzerland is that most are almost deserted. You may have to share your experience with a Swiss school class but these sites are largely ignored the average seeker of archaeological remains. Yet the standard of presentation is as high as one would expect from the Swiss. 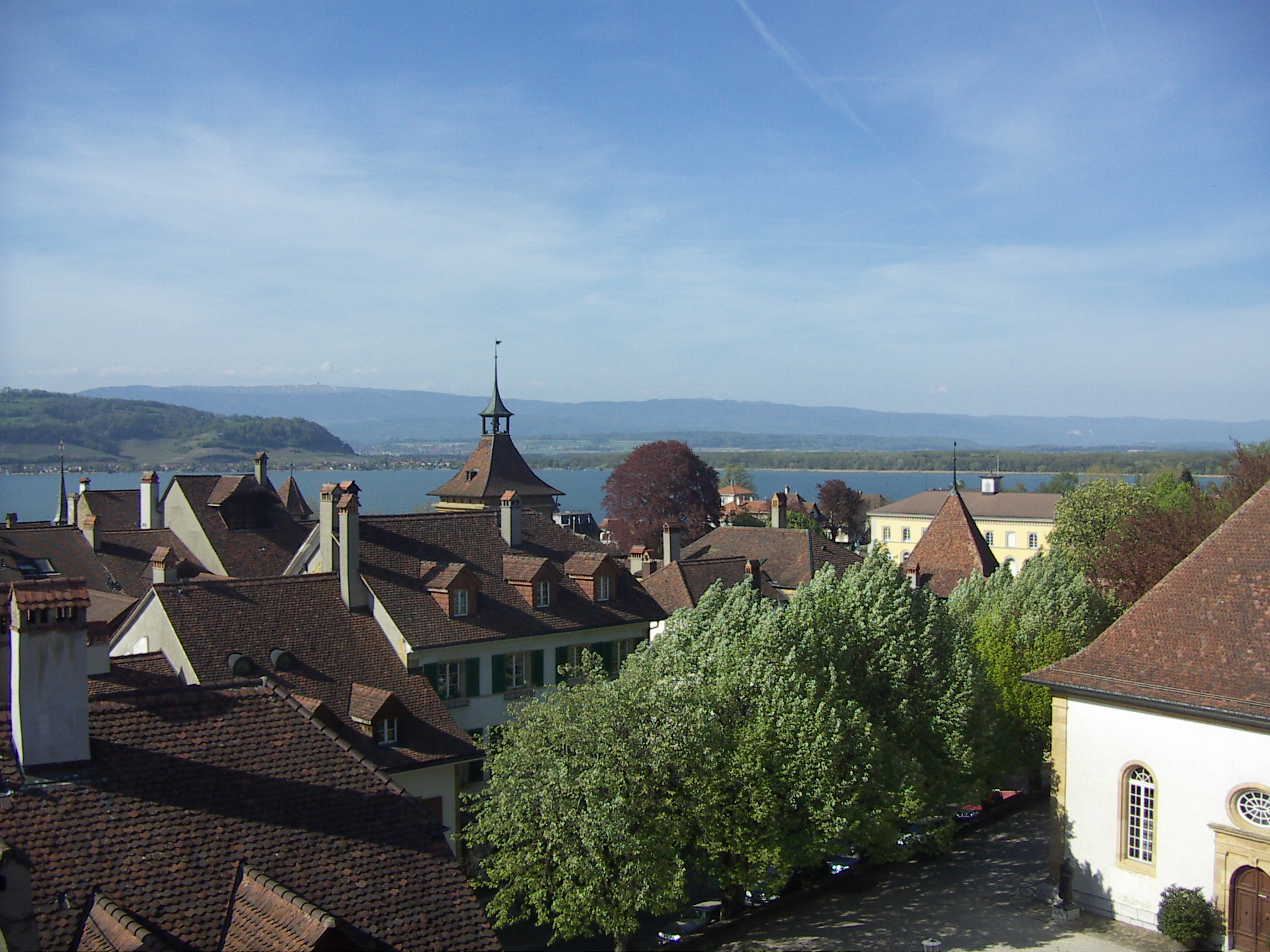 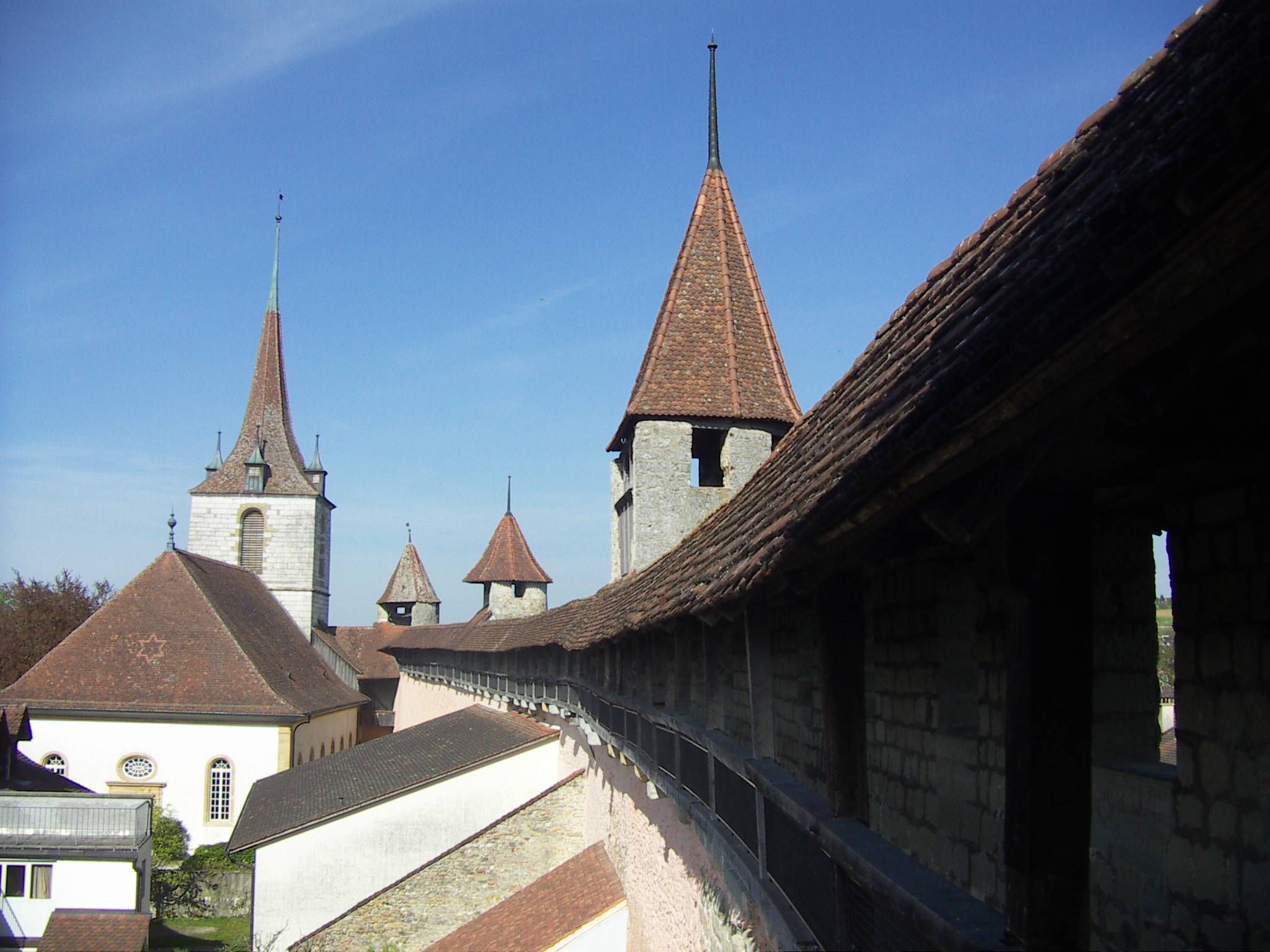 Next door to Avenches is the charming little walled town of Murten famous for the Swiss victory in 1476 over Charles the Bold of Burgundy.

All these places are within easy reach of Bern and require no more than another day, possibly two, added to a Swiss Alps tour.